“The climate crisis is also a crisis of culture, and thus of imagination.”
–Amitav Ghosh

If after reading all available information you still have questions, please email residency@sfai.org. 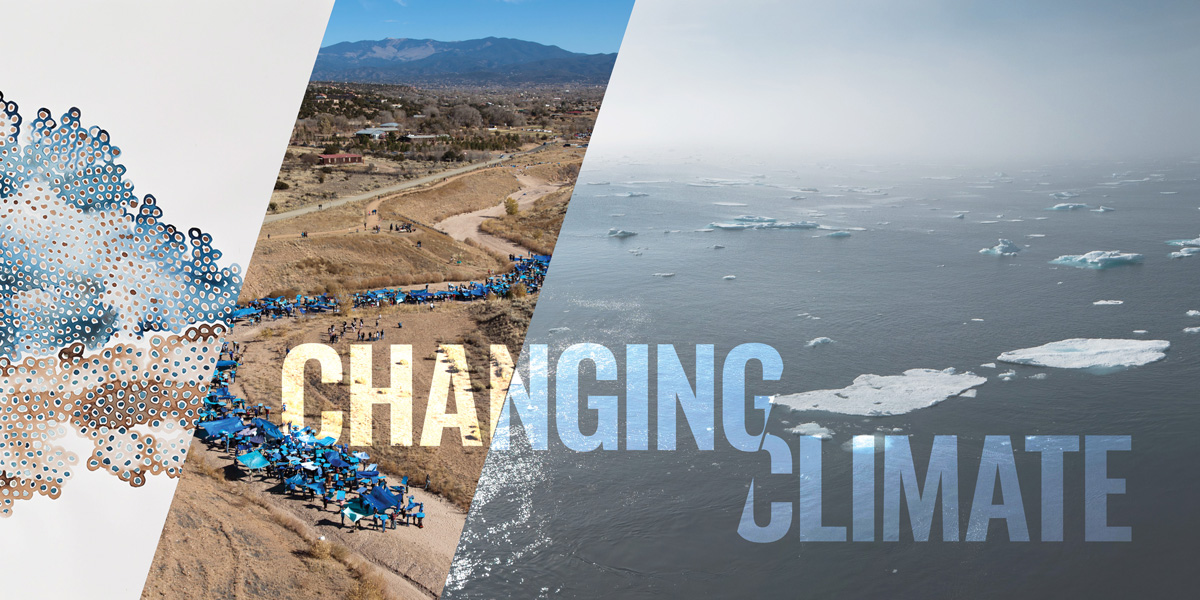 Do we believe we can curb carbon impacts or even reverse the current carbon trajectory and subsequent climate devastation?

The goal to stay under 1.5 degree increase is a global mandate that is dependent on collective social, corporate and political responsibilities and actions that will impact all life on our planet. This question also touches on all of SFAI’s prior thematic investigations: food security, migration and displacement, water rights and drought, equal justice, historical truth and contemporary reckoning, labor and the nature of work, revolutionary thinking and the need for radical, systemic change.

SFAI encourages proposals from artists, activists, culture bearers, and creative practitioners whose work aligns with the theme through the lens of radical connection. Review our Guiding Questions for more information.

We seek artists and activists with proposed focus on research, artworks, and creative actions that:

Please note, this program may be limited to a one month residency, depending on availability.

SFAI offers residencies from a minimum of 1 month to a maximum of 3 months. We do not host residencies in April, August, and December. Residency months do not have to be consecutive (e.g., applicants may elect to come for a month in the spring and then return for another month in the fall).

The Family Residency is offered for just one month, in July only. If you are not a parent-artist/legal guardian of a child, you are not eligible for this program. Please note, we do not allow partners/spouses or children to accompany residents during any other month.

Please note the monthly residencies do not start and stop on the first and last days of the month. The exact start and end dates for the 2023 Changing Climate residency are as follows:

While we are committed to our in-person international residency program, SFAI recognizes the carbon impact of air and car travel.

We also acknowledge that the world’s Indigenous communities play a critical role in our climate future. In particular, it has been shown that land and marine stewardship by indigenous communities typically result in significantly lower human impact and healthier ecosystems.

In 2023, SFAI will commit to offset the carbon cost of air and car travel to support the work of Indigenous climate activists. We recognize this is only one small step toward approaching carbon neutral as an institution.

We are honored to have the participation of the following esteemed artists, thinkers, academics, and practitioners as jurors for the 2023 Changing Climate International Thematic Residency.

Brianna R. Burke is an Associate Professor of Environmental Humanities and American Indian Studies in the English Department at Iowa State University.

Currently she is working on a book titled Becoming Beast: The Humanimal in Climate Justice Literatures, which explores the morphing ideology of what it means to be (considered) animal in a world of decreasing resources, and she publishes on environmental and social justice, as well as on the pedagogy of both. Her most recent publication, on conjoined extinction, is called “Resonant Silences in ‘The Great Silence’ by Ted Chiang and Sila by Chantal Bilodeau” and is forthcoming in Nonhuman Animals, Climate Crisis and the Role of Literature. Brianna was a 2019 SFAI Truth and Reconciliation resident.

A pioneer in land art, new media, and the history and theory of architecture, Sean’s work has been exhibited internationally and has taught courses at Harvard, University of Hawai‘i, Columbia, and MIT. Sean attended the 2016 SFAI Water Rights residency and is currently co-director of the non-profit Hawai‘i Non-Linear, which supports indigenous systems-change in the built environment.

Artist and researcher Nina Elder creates projects that reveal humanity’s dependence on and interruption of the natural world.

Recent solo exhibitions of Nina’s work have been organized by SITE Santa Fe, Indianapolis Contemporary, and university museums across the US. Her work has been featured in Art in America, VICE Magazine, and on PBS; her writing has been published in American Scientist and Edge Effects Journal. Nina’s research has been supported by the Andy Warhol Foundation, the Rauschenberg Foundation, the Pollock Krasner Foundation, the National Performance Network, and the Mellon Foundation. She has recently held research positions at the Center for Art + Environment at the Nevada Museum of Art, Polar Lab at the Anchorage Museum, and the Art and Ecology Program at the University of New Mexico. Nina migrates between rural places in New Mexico and Alaska.

Born and raised in Katy, Texas, a dedication and enthusiasm for the arts extends as far back as he can recall. His sincere devotion to drawing and painting is paralleled only by an interest in science, biology, and philosophy.

His sincere devotion to drawing and painting is paralleled only by an interest in science, biology, and philosophy. In 2003, after one year of undergraduate work at The University of Texas at Austin, Wes broke his C5-C6 vertebrae in a diving accident, suffered a spinal cord injury and became paralyzed from the chest down. After a year of recovery and rehabilitation, it became apparent he would not regain use of his legs, abdomen or hands. Even though the life he knew had changed forever, it did not sway him from pursuing his goals for the future. If nothing else, he decided he was going to spend the rest of his life intensely engaged with his first passion, Art. He returned to The University of Texas, and later completed both his BA and BFA in studio art.

Wes’ work mostly explores the body and how society responds to the human form. In his paintings and drawings; sexuality, grotesque beauty, body ideals, vanity, and the ambiguity between pleasure and pain are all common themes. He references many of today’s popular media, including: magazine trimmings, Internet jpegs, medical book illustrations, and film stills. By experimenting with collage, composite layers, and superimposing images, he is literally able to deconstruct beauty and investigate how images interact. His work discusses memories & time, and how they inform the world around us (or our perception of that world). Masculinity, glorification of violence, growing up gay, gender norms and traversing boyhood into manhood all take on new meaning after a disability. Wes’ initial goal in his art making practice is to explore male-centric themes, but he strongly believes these topics cross social groups and speak to a universal struggle for acceptance and to embrace our differences. Wes is currently a candidate in the inaugural cohort of the MFA in Social Practice at The Corcoran School of the Arts and Design at George Washington University, and was an SFAI Creative Access Fellow.

Jeff Kasper is an interdisciplinary artist, writer, educator, and Assistant Professor of Design at UMass Amherst.

Kasper’s research and creative activity focuses on public art and design as social practice. His artistic and pedagogical work explores social support, in other words, how human connections are forged, maintained, and reinforced, especially in times of stress. In 2017/18, he organized the series Access/Points: Approaches to Disability Arts at CUE Art Foundation, and ever since has participated in public programs and exhibitions investigating disability justice and the arts at the Brooklyn Museum, BRIC, EFA Project Space, OCADU, Dedalus Foundation, Cleveland Institute of Art, and The 8th Floor. He co-founded Civic Art Lab, a community education platform that brings together hundreds each year, in New York City and online, for free, hands-on sustainability initiatives. In addition, Kasper serves as strategic advisor to More Art where he was previously the Director of Engagement and organizer/facilitator of the Engaging Artists Fellowship and Residency Program. He is the co-editor of More Art in the Public Eye published with Duke University Press in 2020.

JeeYeun Lee is an interdisciplinary artist based in Chicago, USA. Through objects, performance, and socially engaged projects, her work explores power, oppression and resistance.

She has worked with social justice and community-based organizations for over thirty years in immigrant rights, economic justice, LGBTQ issues, and domestic violence. She was a Truth and Reconciliation resident at the Santa Fe Art Institute in 2018, and has been awarded grants from the Propeller Fund, Illinois Arts Council, and the Chicago Department of Cultural Affairs and Special Events. She holds an M.F.A. in Fiber from Cranbrook Academy of Art, M.A. in Ethnic Studies from the University of California at Berkeley, and B.A. in Linguistics from Stanford University.

Caitlin has been an Associate Negotiator and Negotiator for over 10 years with the Ontario Ministry of Indigenous Affairs representing the province in various land claim negotiations with First Nations across Ontario. She has also been an Indigenous Advisor for the Ministry of Environment, Conservation and Parks, providing consultation advice and coordination support to Ontario Parks staff. Prior to her time working with the Ontario Public Service, she was a Project Coordinator for the Temagami Artistic Collective (2008-2010) and co-founded the Temagami Community Market in 2008 which continues to thrive to this day thanks to dedicated local volunteers.
Her artistic practice is in beadwork and textile arts. She is primarily a self-taught artist but has received formal training in various fine arts and traditional Indigenous art forms. Caitlin dreams of being a full-time artist when she grows up, living out the rest of her days on a farm surrounded by Shetland ponies. Until then, she continues to work diligently to uphold and remind the Crown of their Treaty responsibilities. Caitlin was an SFAI Truth and Reconciliation resident in 2018.

​​Aaron Payne is an art dealer and advisor with over three decades of experience in the acquisition and sale of Modern, Postwar and Contemporary Art.

He founded Aaron Payne Fine Art in 2000 after working over a decade for other prominent American art dealers. Aaron has had galleries in New York City and Santa Fe.

Aaron Payne was born and raised in Los Angeles. His love of art comes from his parents, and growing up in a home surrounded by the artworks of Romare Bearden, David Hammons, Jacob Lawrence, John Outterbridge, Betye Saar and other contemporary African-American artists. His areas of specialty include American Modernism, the Stieglitz Circle, Postwar, Contemporary and African-American art.
Currently, Aaron serves on the board of the Santa Fe Art Institute and uses his experience in the art world to try and facilitate better access and opportunities for young artists of color. Aaron holds a B.A. in History & Literature from Harvard College. Most importantly, he is a father to two daughters, and also an Ashtanga Yoga and paddle boarding enthusiast.

Shela Sheikh is Lecturer in the Department of Media, Communications and Cultural Studies at Goldsmiths, University of London, where she convenes the MA Postcolonial Culture and Global Policy.

A recent multi-platform project around colonialism, botany and the politics of the planting includes ‘The Wretched Earth: Botanical Conflicts and Artistic Interventions’, a special issue of Third Text co-edited with Ros Gray (vol. 32, issue 2–3, 2018). Her current research, which takes a decolonial perspective, interrogates various forms of witnessing between the human, technological and environmental, as well as experimental forums for environmental justice claims such as tribunals and staged hearings. Together with Wood Roberdeau, she co-chairs the Goldsmiths Critical Ecologies Research Stream.

Marie Wilkinson is a Filmmaker, Documentary Photographer, Architect. In partnership with Cyril Christo, she has been working to document relationships between indigenous people and natural world. Their primary focus has been on Africa.

Wilkinson and Christo’s interest and concerns for the elephant have evolved over the subsequent years as the poaching situation has escalated. This long-term relationship to Africa magnifies the urgency of the struggle and presents a singular lens throughout their journey.

Their photography books include In Predatory Light: In Search of Lions, Tigers and Polar Bears (Merrell, London 2013) a dedication to three endangered bioregions, and Walking Thunder: In the Footsteps of the African Elephant, prologue by Dame Daphne Sheldrick (Merrell, London 2009), a testament to the African elephant.