SFAI Blog: The Fight for Our Existence, A Letter to Rebel Artists 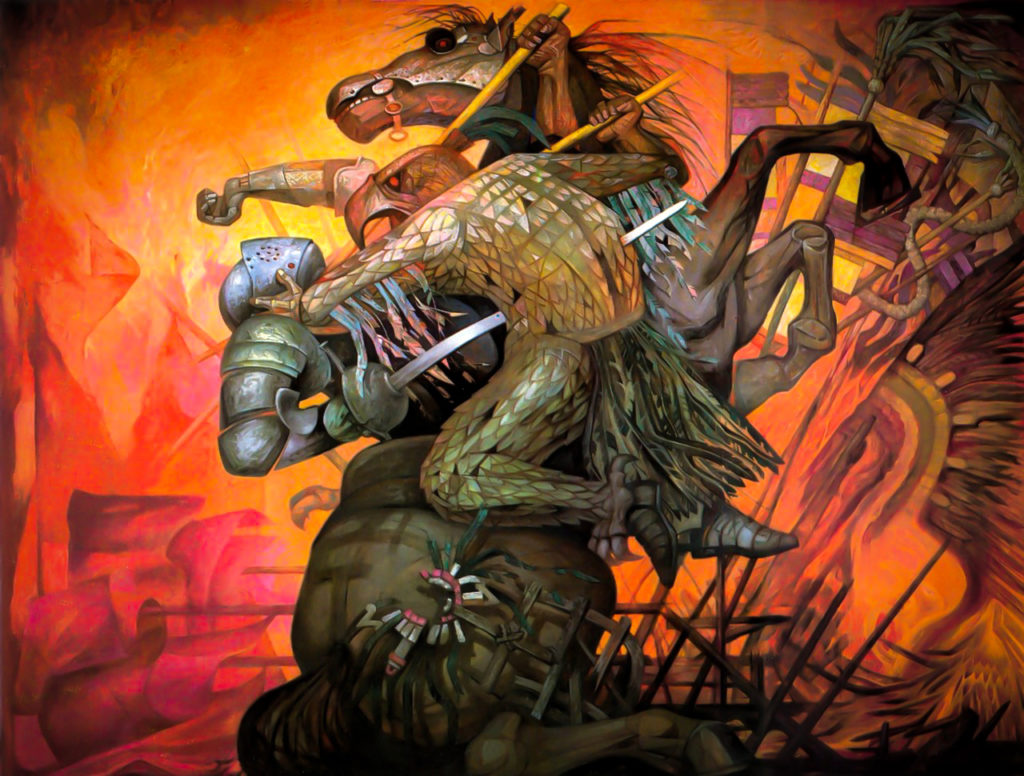 It knocked me to the floor. There I was, a fourteen year old Mexican American boy wearing baggy pants, on the pipeline to becoming another Chicano statistic of poverty, gangs, and substance abuse. I was in the castle of Chapultepec in Mexico City, and I had turned a left on its large, green marble floor. There, towering over me was a painting that glowed red ember and orange lava. Twenty feet high and thirty feet across, the crashing diagonals engulfed a conquistador and aztec warrior in combat. Their steel sword and wooden spear drove clear through each other in a monumental painting that froze time. It was the birth of two cultures: Spanish and Indigenous warriors in the battle for México, a conflict of origin. I almost fainted, because for the first time, I saw myself.

I saw that I could be two powerful forces at the same time—español y indígena. I was mestizo, Mexican-American, chicano, and the opposing forces were not a contradiction or a source of weakness, but instead a source of power. That was the first time that I realized I believed in the power of art.

I know we have all had this experience in our lives. Whether it’s from the first photo we saw of our grandmother as a child, to our first movie-date as a teenager, to the red and magenta painting by Mark Rothko at the San Francisco Museum of Modern Art that seems to know our name, we’ve all had moving experiences with art. Art changes what we feel and know about the world. Art leads to revolutions of ideas, and we need a revolution.

We are currently in the fight for our own existence, not in the poetic, metaphorical sense. The fight is real; the fight is now. First, came the public incorporation of sexual assault of women in a presidential election campaign, then the attacks on the National Endowment for the Arts. Then there was the Muslim ban post-election, then the second Muslim ban, and now the third, then they came for transsexuals in the military, then the attack on science itself and the silencing of the National Park Service, then the attacks on the Dreamers, then emboldened neo-Nazis marching across the country, then came the attacks on black athletes kneeling against systematic police brutality, and then a massacre that somehow leaves us more divided than united. It doesn’t stop— each horrifying act simultaneously dulls our consciousness and enables more hate. We’re under attack and it is artists that are on the vanguard of fighting for our right to live.

Artists are revolutionaries that are brave enough to say, “this is who I am, this is what I believe, and my creation has a right to exist.” The most moving performance of falling in and out of love that I have ever experienced was on the banks of the Trastevere river in Rome. On a small stage on a hot July night, a trans performer lip-synched and danced Alicia Keys “Falling” to a small crowd and to the stars. After an uproar of applause, everyone walked away from the stage in silence, in awe of what they had just witnessed. Artists are brave enough to create for the sake of beauty, death, love, fantasy, politics, or for the sake of nothing at all. Artists take risks in being and in creation that others won’t. 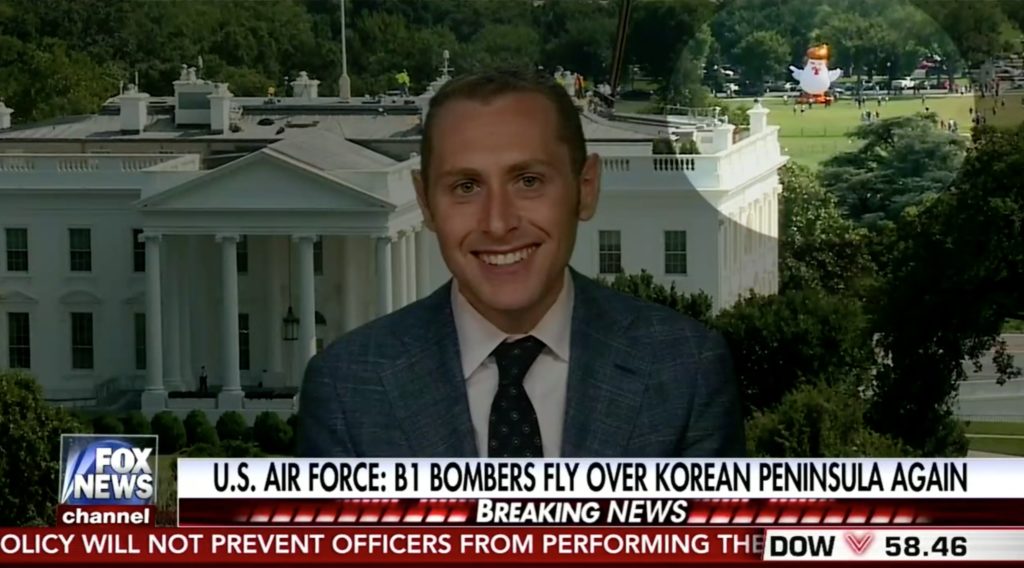 Remember the Trump Chicken? The 40 foot inflatable chicken with gold hair inflated behind the White House, just in time for a photoshoot visible from the White House lawn? It interrupted a FOX news report U.S. bombers flying over Korea. “Shep it appears to be a very large chicken,”Josh Lederman of the Associated Press told Fox News’ Shepard Smith. It made us laugh at Donald Trump’s refusal to release his tax returns, but in its absurdity called attention to the spectacle within the Capitol itself. Designed by Seattle artist Casey Latiolais, it’s been used in many ways. When Neo Nazis planned a manifestation in Crissy Field in San Francisco, there was a fundraising campaign to rent a barge to inflate a giant Trump Chicken that would ruin any selfies a Neo Nazi would want to take with the Golden Gate Bridge. The Neo Nazi manifestation didn’t occur, partially, I like to think, because of the threat of Trump Chicken photobombs.

Or, what about the billboard-dwarfing portrait of a Mexican toddler peering over the U.S.-Mexico border? Sixty five feet tall and inspired by a dream, French street artist JR’s monument dwarfs U.S. Immigration Customs Enforcement officials working to keep Mexicans out of San Diego. It was unveiled the week the Trump administration released its plans to end the Deferred Action for Childhood Arrivals (DACA), the program that has protected 788,000 undocumented immigrants that came to the United States before they were sixteen. What does a sixty five foot baby think of a twenty one foot wall? What do the 788,000 Dreamers think of when they see an image of a sixty five foot baby towering over the border? Art disarms, and creates the ruptures that allow us to imagine a better world. 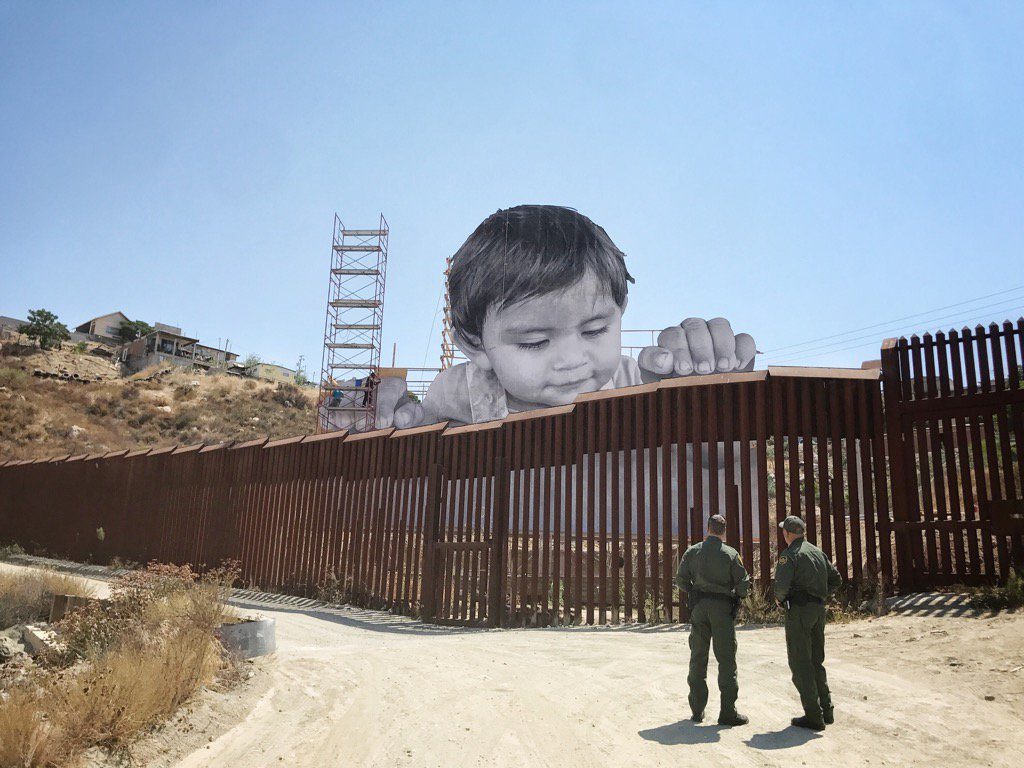 The question is, what can we do today? Rebel artists, we can make a giant Trump Chicken. Or, we can create a toddler that dwarfs the idea of borders, or we can perform love like no one has seen it before, or we can paint a painting that allows a 14 year old Chicano with baggy pants to see himself.

It first begins with radical imagination, and follows through with radical action. It is up to us to imagine a more equitable world, and then make it happen. We cannot wait for tomorrow, because- if they haven’t already- it is tomorrow that they will come for us.

Invest in SFAI + Get a Gift in Return! For suppor

TILT Podcast / Episode 6 / To be released May 28th