SFAI Blog: The Radical Experiment We Call a Residency

Centered on a courtyard with cerulean walls that seamlessly flow into an unobstructed view of the sky, SFAI’s unique building reminds me in many ways of a big, beautiful petri dish. Inside, ideas and actions incubate with limitless potential among the flux of remarkable people living and creating within its walls. While SFAI does not require residents to work collectively, the physical layout of the building encourages regular interaction among our residents. And, like a culture in a petri dish, these interactions grow organically. In turn, this makes me think of the annual residency theme as the agar that supports the growth of a culture within a petri dish; a fluid medium that provides the necessary conditions for organisms to develop, but which in itself is not defined by a specific structure. The residency theme and basic questions we pose around it are not only catalysts for critical thinking, but common ground upon which the diverse peoples and disciplines in the residency program can directly engage the intersectional human experience and foster mutual understanding through synergistic conversations. In this dynamic environment, SFAI supports creativity without constraint. A direct result of this radical experiment we call a residency program is collaborative research and works that transcend the limits of traditional disciplines, and innovation that addresses pertinent questions facing diverse regional and global communities in a common effort to promote positive social change.

We just concluded the fourth month of the 2018-2019 Equal Justice themed residency. Since September, SFAI has hosted an incredibly inspiring and impassioned group of 30 change makers.

In this brief time, our residents have initiated and completed so many ambitious creative projects in service of Equal Justice that I can only highlight but a few here:

E. Oscar Maynard sewed and constructed (entirely by hand) and then raised for the first time at SFAI a life-sized revival tent for queer people to testify about their experiences and release the poisons they’ve been forced to hold around body, self, and belonging. 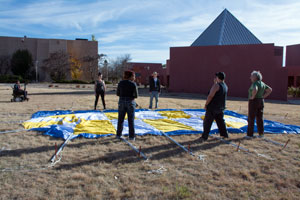 Eva Rocha, a tenacious survivor of kidnapping in Brazil during her youth, built an imposing barbed wire fence draped with casts of human feet to confront and simultaneously tear down preconceived notions of access and acceptance to the United States, the art world, the female body, and beyond.

Jay Critchley recreated the White House as large-scale interactive sculpture, which he then tarred and feathered to create a new public monument that critically reflects upon the politics of race relations in the United States and how they manifest in the presidency. 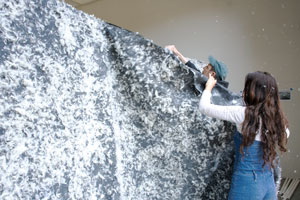 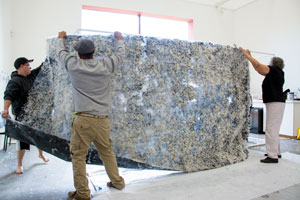 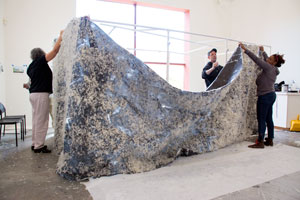 Peggy Diggs thoughtfully chipped away at her own identity to uncover a better understanding of “whiteness” and privilege through face-to-face interviews about these historically taboo topics with over 100 white people and people of color.

Quenna Lené Barrett drew upon her experience as a black woman, accomplished actress, and training in the Theater of the Oppressed to guide a collective re-writing of the Declaration of Independence, transforming it into a more inclusive document that resonates with the panoply of people who are today’s Americans.

Reveca Torres, founder of Backbones, a non-profit organization that helps people with spinal cord injury or disease, audaciously broadcasted a rallying cry for a Disability Image Revolution that transcends the typically staged depictions of people in wheelchairs and promotes more realistic views of everyday people just living their lives.

Robert García worked tirelessly to launch an incredible new campaign called Healthy Living in the Parklands as part of his 30+ year career as a civil rights attorney, founder of The City Project in Los Angeles, and member of the national organization Green Latinos.

Tamara Ann Burgh courageously unearthed and examined generations of trauma embedded in her DNA caused by the suppression of and shame associated with the indigenous ancestry of her bi-racial Inupiat and Swede family through a meticulously crafted series of mixed media works.

Veena Vasista used participatory exercises to playfully questioned both her creative colleagues and local authorities about how they might transcend the rigid and opaque structures of public policy making to collectively create a more transparent, loving, kind, and expansive model for community building.

Veronica Jackson boldly assumed the role of artist for the first time in her distinguished career and used her work to shine a light on how incredibly accomplished black women are repeatedly made to feel invisible and inferior in spite of all of their personal and professional achievements.

I cite these particular projects because, although individual residents initiated them, they all grew into something much bigger than any one person, through the insights and assistance of fellow residents and the larger community. This spirit of openness, kindness, and collaboration nurtures like a rhizomatous organism in the rich testing grounds at SFAI, which is exactly what is needed to cultivate Equal Justice on a grand scale.

The non-linear, often chaotic, consciously rebellious, emotionally messy, and intellectually challenging process of creating something new -without a scaffold- thrives in this building. It is within the SFAI residency as laboratory that additional work is being done to creatively break down misconceptions, stereotypes, and structural oppression experienced by women, queer and non-binary people, disabled people, black, indigenous, latinx, Asian, Muslim, and Jewish people, and anyone who is otherwise marginalized. But perhaps most importantly, in place of these oppressive forms, our residents are actively creating new images, narratives, and structures that support Equal Justice.

Over these past four months, I have had the unique pleasure to observe first hand the results of this radical experiment we call a residency program. And the beautiful blue courtyard at the heart of our building reminds me every day how, when people are free to come together in a supportive context of inspired interdisciplinary thinking and creative risk taking, the sky is the limit as to what they can accomplish.