SFAI BLOG: AN ARTIST TALKS BACK TO POWER

SFAI BLOG: AN ARTIST TALKS BACK TO POWER BY GUILLERMO GÓMEZ PEÑA 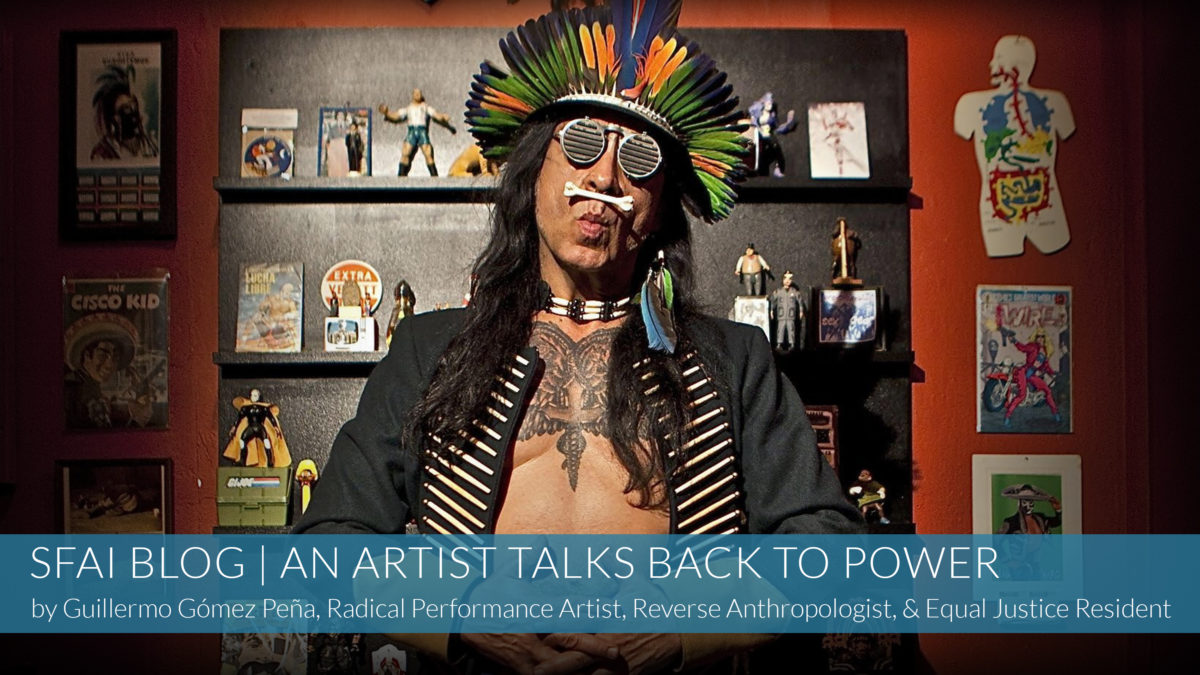 I want to thank you for so many things tonight.

I hadn’t used these words before in the realm of politics until you came along. You are widening my vocabulary, thanks.

I wish to thank you for awakening so many communities of difference throughout the world.

Thanks to your daily outrageous behavior and belligerent language, women, Blacks, Latinos, Muslims, queers, environmentalists, artists, and intellectuals worldwide now have a concrete, iconic enemy to mobilize and fight against. It’s making it so much easier for all of us to connect the dots and build a conceptual coalition; to imagine the possibilities of a world without people like you, and a world without violence. It’s imaginary activism at its best.

Thanks to you, the borders between our communities and countries are being erased as I speak. We now know we are a formidable transnational majority.  As we speak, a new vibrant human and civil rights movement is in the making. Muchas Gracias en español.

Thank you for initiating a new generation of young activists and for awakening millions of Americans from the sleep paralysis of our prior “consumer democracy.” The political street of America is very animated, and every conversation we have has substance; even our conversations with mono-syllabic techies and taxi drivers who barely speak English.

Thanks for facilitating the hundreds, thousands of epic mobilizations, school walkouts, strikes, flash mobs, viral digital activist projects & “dead in” performance actions; for giving a new meaning to the “anonymous” and pussy riot masks, for helping so many artivists across borders to regain focus, energy and originality. Nowadays performance art is lingua franca.

We thank you for providing us with so many “Trumpisms” such as “Make America…Mexico again,” or “Trump no existe” and certainly the hashtag “not my president.”  You are a genius of involuntary activism.

I must confess that we artists here at ground level, were a little lost and very divided & fighting amongst ourselves. But thanks to you, the victimization Olympics, the essentialist culture of hypersensitivity and pathetic “trigger warnings” permeating U.S. media and academia are over. We now have more pressing and clear issues to deal with. We are back on track. Gracias mil.

Thanks to your outrageous daily tweets it has actually made it easy to oppose you. By simply “quoting you,” we are creating instant anti-trump statements. You own words will be your greatest demise. “Trust me.”

Your misspelled tweets and outrageous executive orders against the poor, the ill, the homeless, foreigners, & the queer community remind us that science fiction is merely a chronicle of daily life. The Trump effect is making the most outlandish conspiracy theories believable. Verbigracia.

Your defeated travel bans are reinvigorating the pro-immigrant and pro-refugee movements. Gracias.

Thanks to your daily defiance of the International Declaration of Human Rights and the legacy of the civil rights movement in the U.S., we are now inspired to (re)read history books and classic political documents and speeches, whose meaning we had forgotten. Your are bringing history back to life, reminding us that Nixon, Kissinger, and George W Bush were like altar boys in comparison to you. Even George W. is now an anti-Trump activist. Ajúa!

Thank you. Your attempts to privatize education and destroy public schools are now politicizing all teachers and making them aware of how important education for all is. All my teacher friends are on fire. Yes!

Your ongoing mistreatment of women has sparked a national conversation that led to the outing and downfall of depraved patriarchs such as Bill O’Reilly, Roger Ailes, and Harvey Weinstein. This embarrassment has outraged even conservative republicans and that is hard. Good for you.

Thanks to your McCarthyan witch hunt and blacklisting of journalists-huge mistake- the mainstream media has finally awakened and become a true critical force. I am surprised by how you managed to turn CNN, MSNBC, CBS, & other corporate media outlets into anti-government ombudsmen. You have made so called “fake news” watchable again. I take my hat off to you.

Your total contempt for global warming is educating people about the man-made perils to our environment and the factors contributing to the uncanny number of natural disasters striking this year. We now know the connection between the Mexican earthquakes, the 20 hurricanes that devastated the Caribbean, the U.S. Southeast states, and the wild fires in California.

Thank you for reminding Americans that politicians & corporations rarely work on our behalf and that the word “democracy” is merely a euphemism for savage capitalism, corporate greed, regime change, military might, strategic secrecy, and more recently a war chant for the alt right. I want to thank you for making the predatory intentions of the current U.S. government abroad, very clear to the rest of the world.

Democracy! What a euphemism. Thank you for reminding us that the term “democracy” from the lips of your administration, involves the enforcement and exportation of an authoritarian belief system to the rest of the world, and the punishment of those nations unwilling to carry out America’s “democratic mandate.” You’ve outlined it for us better than Chomsky.

I also want to thank you for helping me and my colleagues re-politicize our art & become more civic-minded and politically engaged on a daily basis. Gracias de nuevo en español. We are 100% re-committed to our daily practice of social justice through art. The kind of art that no doubt gives you the creeps. Not exactly a still life painting for a corporate office.

I finally wish to thank you for so many gags and involuntary comedy skits you’ve provided us on a daily basis–you are pushing the limits of what is permissible in comedy–not to mention your ongoing inspiration for the creation of so many performance and public art pieces, graffiti, street art, spoken word poems, cartoons and music, including this open letter.

You keep us sharp, awake and on point. Gracias again.

Enough for today! My sarcasm stops here. It all feels like some kind of epic storm that we might not make it through. The fact is that you and your sinister crew of billionaires and military extremists are really really scary!

from the borderless Americas,