A SEARCH FOR FREEDOM & REFLECTION

For a long time growing up, I never felt like I belonged. At school, at grammy’s house with my cousins, I wasn’t black enough. I had “good” hair. I “talked white.” I enjoyed learning, went to bed with books. I remember often being asked, “What you mixed with,” as if I couldn’t just be black. As if being just black wasn’t enough. My eyes too slanted. Even today people still try to tell me I’m not from the Southside of Chicago.

Declaration of Independence rewrites and revisions from various “Re-Writing the Declaration” workshops. “Re-Writing the Declaration” Project Description: Catalyzed by the current organizing energy of our country, while recently reading the Declaration of Independence I realized that America’s founding documents were never intended to include many of the people who call this country home today. The justice system doesn’t protect black and brown people for many reasons, one of which is because it wasn’t designed to. Because of these and other shortfalls, I want to rewrite the Declaration as an artistic, performative, and participatory rendering of a new and more inclusive Declaration. “Re-Writing the Declaration” will ultimately result in a participatory, theatrical experience that invites audience members to engage with the performance in some way that asks them to respond to injustices that are perpetuated, and even defended, by our country’s founding documents. The development of the play will also be participatory, and will include and center community voices and input. I will conduct workshops utilizing applied theatre methods to engage Chicago artists, activists, and often marginalized communities in imagining a new declaration, what society might look like under an alternative founding document, and how we might begin practicing those images.

For a long time growing up, I thought I would marry a white man. At home, on Disney movies, I didn’t see black couples foolishly in love (and perhaps for good reason). The black love I saw wasn’t represented, and I’m only just now beginning to realize that what I was witnessing was love, it just didn’t look like what Disney packaged and sold. My parents separated while I was young, but I never saw them argue or fight. I saw grand-mamas raising their kids’ friends and then some, everyone calling her house home on Sunday. Aunties and uncles and cousins pitching in.

For a long time growing up, I struggled to fit somewhere, to belong anywhere. I struggled because I didn’t see honest or accurate reflections of myself. I barely saw them at all.

Performing a short piece with artist Grace Needlman about memory, grandmothers, and redlining.

There’s something in these anecdotes about the images of blackness that black people have been fed in this country since our time here began. Something about ourselves that we were made to believe was true, stripped of knowing what might’ve actually been. Something about loss and lack and representation and made up memories. I think I have been struggling with this all my life when trying to find places where I felt like I fit in. For an even longer time than I have been looking to belong, black people in this country have been left out of doing so, no, structural racism and police brutality are not new. The mass consumption of and fascination over dead black bodies is just more visible.

And we . . . are . . . tired. Tired of seeing it, tired of being it. I heard a recent comrade and friend, co-founder of the #LetUsBreatheCollective in Chicago, term what is often referred to as the “Movement for Black Lives” as the “ Black Life Movement.” We, new, young, righteously angry, and so unapologetic organizers and activists come from a tradition of black movements: the Civil Rights Movement, the Black Arts Movement, the Black Power Movement. This is our heritage.

I embarked, or rather stumbled, upon this journey of the project of “Re-Writing the Declaration” while, again, not seeing myself. I was angry about Trayvon and Mike and Rekia and, still, Derrion Albert, and Hadiya Pendleton, and finally started to find myself, see myself in these young, black people realizing their collective power, and taking up arms of protests against injustice. They were smart, crafty, and organized – well organized. And they were flawed, but tried to make space for these flaws, called them into the space and themselves into accountability. 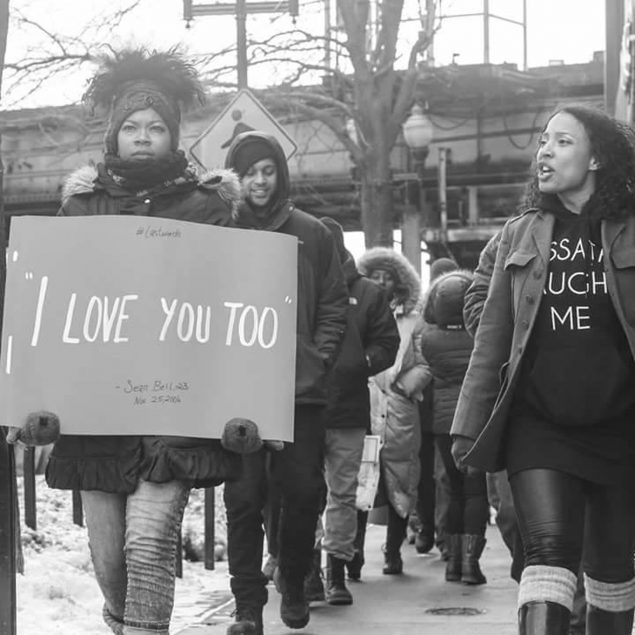 It was with these people, the Chicago Chapter of The Black Youth Project 100 and other organizers, on a bus either headed to or coming from Cleveland for a Movement for Black Lives convening, either before or after we en masse tried to de-arrest a young black boy and got pepper sprayed in the process, where I said out loud that our laws and “justice” system don’t protect brown and black people today, because from its inception, it was never designed to. Black people weren’t considered whole under the constitution, and we were almost altogether excluded from the declaration. How could laws today ever treat us justly when we have never been seen as equal to white men? I may have said out loud, “I wonder what it would look like to re-write the Declaration of Independence”. I had recently revisited it during some sort of professional training. I cannot recall what the training was, but I remember vividly the anger that welled up in me as this group of mostly young and mostly brown people read the words out loud. The confusion, the feelings of hypocrisy, and what felt like betrayal, though a place that never claimed to belong to me could never betray me.  And this is what I spoke across the bus row that day as we either entered or departed Cleveland. Mariame Kabe then said to me, and I’m likely paraphrasing here, ”you should do it, you’re an artist,” but she did tell me to do it, and did say I should use my artistic capacities to do so. 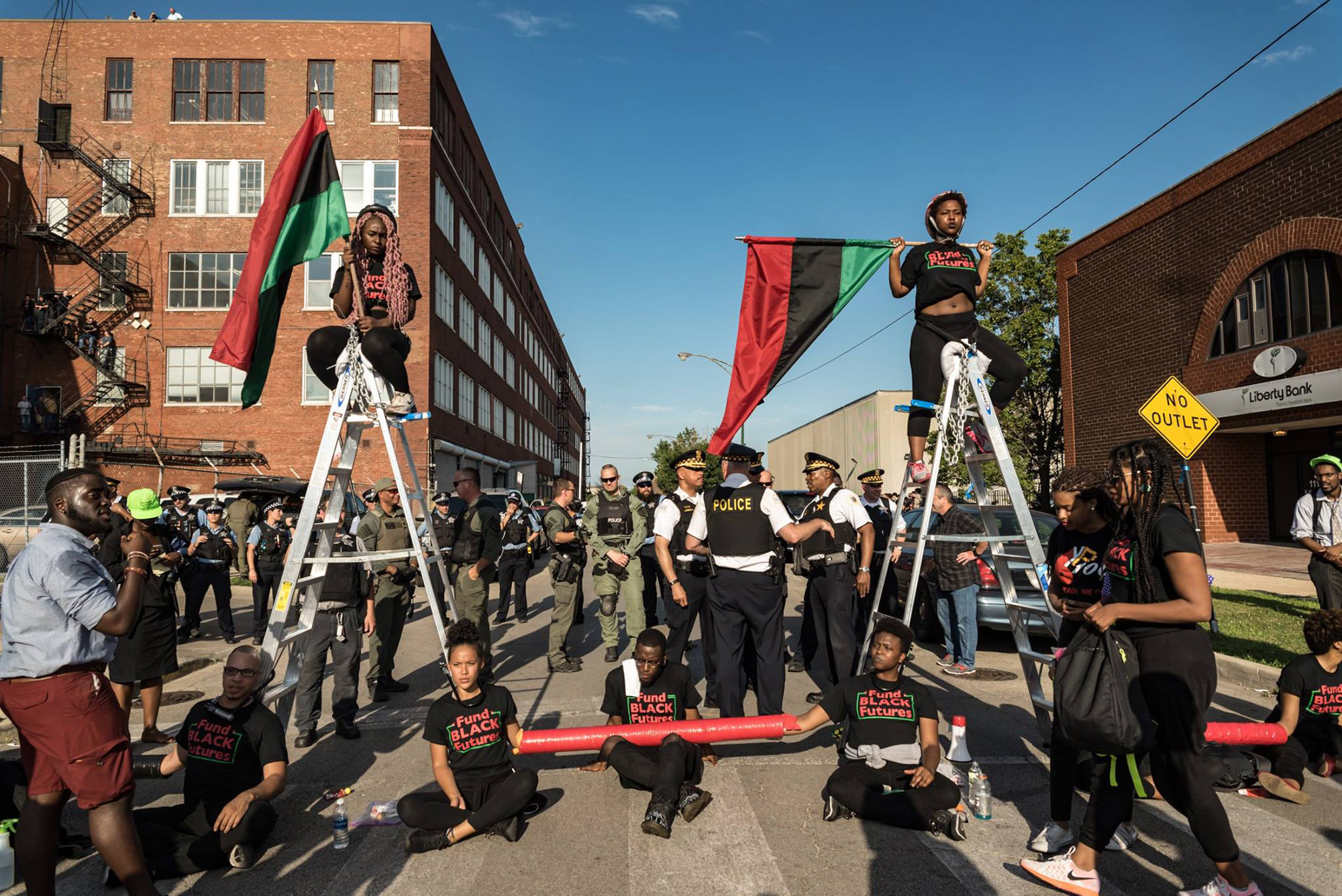 Credit: Love & Struggle Photos. In summer 2016, BYP100 Chicago in coordination with the #LetUsBreathe Collective and the Movement for Black Lives, led #FreedomNow, a day of action to shut-down the Chicago Police Department (CPD) Homan Square ‘black site’ in Chicago to demonstrate the urgency in investing in new alternatives and divesting from police systems that violently oppress Black people.

Since that time, I have had this vision of “re-writing the declaration” mostly in my head, sharing it in incomplete fragments and half thoughts with a few trusted friends, trying to articulate an idea. I had been passively working on it while never taking a break from auditioning, rehearsing, directing, facilitating, and managing teen programming, trying to remain involved in organizing spaces, in the middle of Danielle Allen’s “Our Declaration” for a year, telling myself I’d get to it eventually. Finally I found the courage to make time, to apply to the Santa Fe Art Institute (SFAI) for an artist residency, to apply to a Chicago Department of Cultural Affairs and Special Events grant, and a few other things, and people started saying yes. People and cultural institutions were interested, and apparently invested in, this seed, this infant, of an idea.

At SFAI, I had time and space to focus on just this one thing, to breathe. I quickly felt like I belonged with the community of other artists thinking about issues of social justice. They asked me questions I couldn’t answer. Drove me to drum on ancestral lands. I went to bed, and woke up, with books. I got (sort-of) good at sudoku. I read the (physical) newspaper. I set no alarm clocks. Time was mine to bend. I bathed in soothing, scorching waters under full moonlight, made offerings to mama earth and thanked grandmother moon. I learned to acknowledge the land on which I stood. I tasted coffee from a pour-over and needed no milk. I came home and bought a Bialetti. And I wrote the first pages of my play.

The rest will be written by you – maybe not you specifically, but the global you. Especially if you are black or brown or femme or queer or artist or organizer or have existed on the margin or live in the borderland or have ever felt like you didn’t belong. I learned that I cannot, and should not, rewrite this thing alone. Attempt to make decisions on behalf of “the governed.” The governed know how to govern themselves. 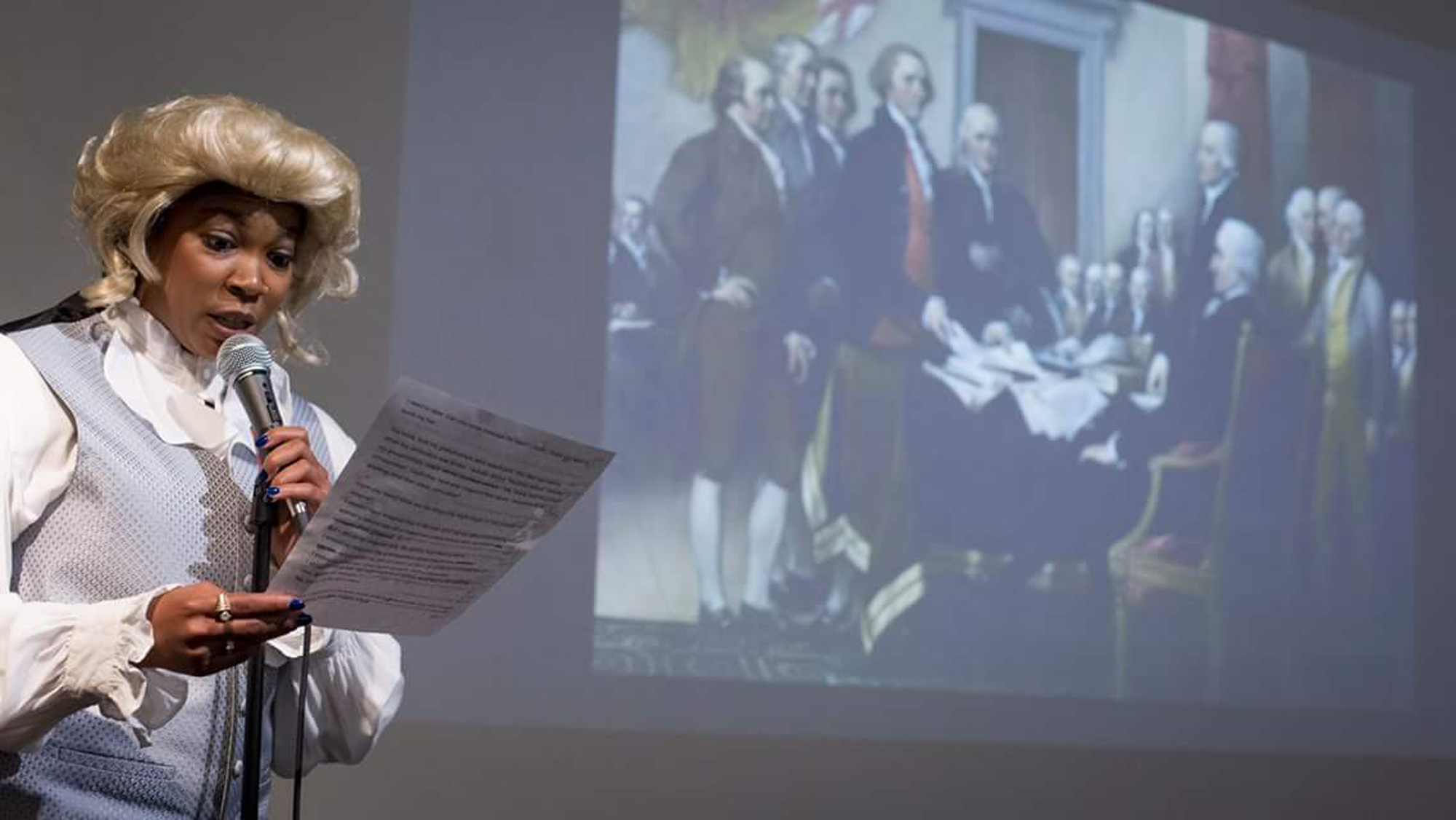 Still from SFAI140 event in November, playing with the images of our founding fathers.

The play started out as an idea to call out systems of injustice against people of color, to equip them with tools and practice in real time ways in which people experiencing and witnessing oppression could become active players in changing such systems. It sought to explore the ways in which the theater could not just potentially inspire change, but be an active site of social transformation. It will still include these kinds of actions, but while I was in residence at SFAI, it began to be clear that this was a play about, and for, women of color. I realized that I didn’t want to exhaust energy making something against anyone or anything, but rather for someone. I remembered that there still that aren’t enough stories for people who look like me. I remembered my seven year old sister begging for me to braid her hair like Elsa’s from Frozen because, still, there are not enough Disney protagonists that have hair like hers. And then, I kept encountering issues of blackness and womanness relating to hair and image and who gets to control those of black women. Lupita Nyong’o’s afroed ponytail had been photoshopped off the cover of a magazine, as Solange’s braided crown had been earlier this year. And then I remembered the image of Trump surrounded by a group of white men signing some anti-abortion legislation, and compared it to the image of our “founding fathers,” a group of white men, writing and signing what would inform legislation for decades to come.

This play will be primarily for and about women: black and brown women, queer women. They have been showing me who I was, who I am; and it has taken too long before I could recognize it. This play is an ode to those women, my grandmothers and aunties, artists and organizers. Having not seen myself, not been allowed to be my full self for so long, I can only imagine the time it’s taken us collectively. I think it’s time for us to not only have a seat at the table, but for us to redecorate it. To be in control of our stories and images. Our hair, our bodies.

What happens when we get to see ourselves on stage? When we are allowed to be whole. To take up space. And what can happen when we take in our hands the tools of writing our world, laying out the foundation? For me, I’ll finally be able to see my reflection. I’ll be able to imagine, and feel, that this space, this country, this table is mine, that I belong here, because people like me will be the ones building it. 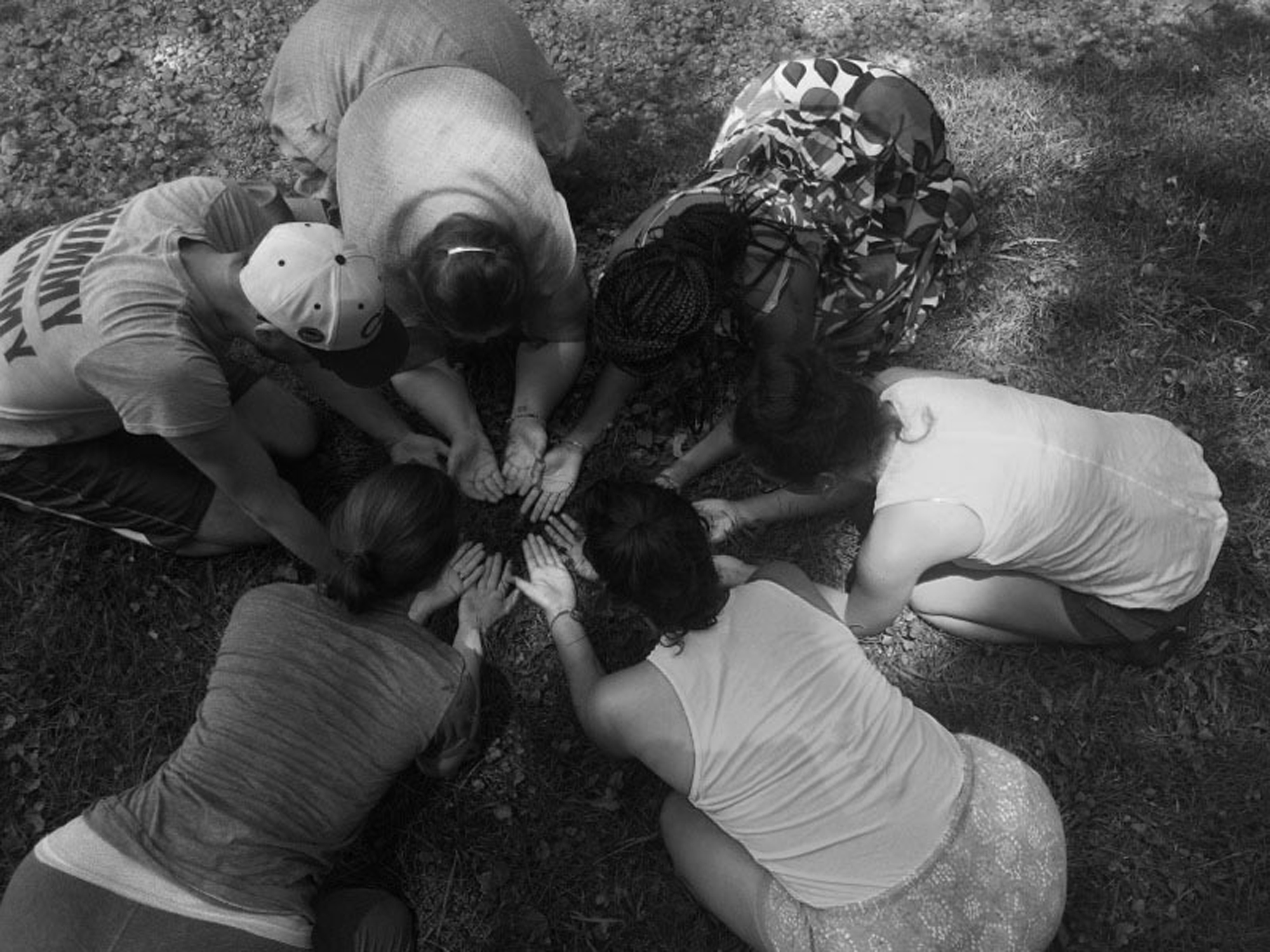 Making tableaus of envisioning the world we want to see in a “Re-Writing the Declaration” workshop.