BLOG: A Drop in the Bucket 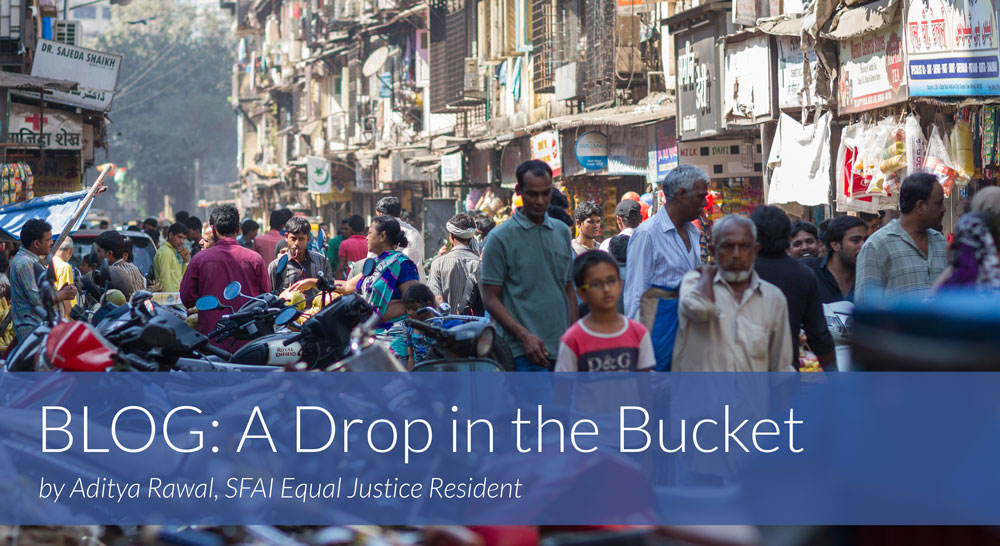 Equal Justice is an unattainable goal. This is especially true in India, a swathe of land that is too large and populated to be effectively managed as one nation — a bit like the United States, only more diverse and far less organized.

To achieve justice for one party, you invariably step on the toes of another. A case in point, the rehabilitation of people living in dilapidated buildings in Mumbai. These pre-Independence era structures were built more than 70 years ago and have undergone little maintenance or repair since. Every now and then, one of them crumbles to the ground, causing loss of life and, obviously, property. However, residents of such buildings often refuse to vacate because they will be moved to (eminently uninhabitable) rehabilitation camps, hours away from their original homes and workplaces — for there is simply no place to put them inside the city.

Their refusal to move causes great losses to the developer, who has paid a bribe to secure the rebuilding contract (the word “merit” has many meanings in India, but it never means “merit”). Most of these builders are overleveraged, and they inch closer to bankruptcy as the residents dig their heels in. Cue the occasional visit by hired goons, to threaten and rough up residents, making their precariously balanced lives feel even more unstable.

The land that these buildings stand on is often owned by the central government, and the transfer of ownership to the local municipal corporation or another private entity is a lengthy process, mired by bureaucratic red tape. Exacerbating this problem is the fact that each administrator enforces the complicated rules differently. There is a lot of room for exacting political vendetta. All of this means that construction of new buildings can take ages, even after being vacated. So those who do move to the “temporary” camps often find themselves stuck in the same place even after ten to fifteen years.

As an artist and a student of politics, I endeavor to decipher this system, to lay bare its workings for thorough examination so as to provide a workable solution.  It is easy to vilify those that pay bribes, but that is the only effective way to get things done in India. Constructing a perfectly legal building means bribing upwards of ten different parties. Bribes range from a bottle of scotch to a few million dollars, depending on the post of the official and the size of the project. These builders, and other businessmen, have invested their wealth and a major portion of their lives into this flawed system, and it is naïve to expect them to change their ways or sacrifice when the stakes are at their highest.

When you must exert yourself in this manner to accomplish the simplest tasks, and you receive no favors from your government, you grow selfish as a citizen. I am less likely to go out of my way to do something beneficial for society — especially if it comes at the cost of my own well-being. Instead, I would work to accumulate as much wealth, power and agency as I could to protect myself and my family. A few years ago, I met a trucker on my travels across North India. He told me how he once ran over a villager who mistakenly stepped onto the highway to defecate at night. The man appeared out of nowhere and the trucker had no time to swerve out of the way. Certain that the villager had died on the spot, he drove on and washed his bumper and tires at the next rest stop. He did not stop or inform the authorities because he was certain that the resulting investigation would have meant losing his livelihood and, possibly, a lengthy jail term… Everyone but the privileged are potential victims here.

Coming to terms with this sense of inertia is imperative to understanding why India functions, or malfunctions, in the way that it does. If something does not affect you directly, you turn a blind eye to it and move on with your life. Sure, the sight of poverty and pain can be shocking, but too much of it desensitizes you. The windows of your air-conditioned car become an impenetrable wall between you and those that are not as fortunate. This is not, of course, to discount the numerous activist movements that abound in the country. Nor is it to say that this happens only in India, but it is more apparent there than in the West, where one is still expected to offer token sympathy or protest.

Collective outrage does appear after selected tragedies that one simply cannot ignore, like a terrorist attack or a gang rape in a city, but it dissipates soon after. And then life takes over. It makes one wonder if social justice is the preserve of prosperous, less populated countries. Perhaps, as India grows richer, it will become fashionable to be a conscientious citizen in our cities too, just as it is in New York, London and so on.

I often wonder if I can make a real difference by telling stories, or by writing plays and films, given that people remain largely unaffected despite being exposed to so much. On questioning my value as a storyteller, I realize that I tell stories, first and foremost, for myself – and if I tell them well perhaps I can affect the point of view of at least a few people, even if only for a few hours, before they return to old habits. I may not be able to transform the world with a story, but telling it is a way to help me and my audience make sense of the world, or even leave it behind for a few hours. In India, millions of people go to the cinema to escape. The evidence of this lies in the success that so many inane Bollywood films have had over the years. Other times, stories help one come to terms with their problems, they remind them that others have seen similar troubles, but have survived or even emerged stronger from the ordeal.

It is in recognizing my limitations that I find my purpose as an artist. Even a drop in a bucket is a change and, yes, equal justice may be an unattainable goal, but it is one that we must continuously strive to achieve.