BLOG: “… With liberty and justice for all.” 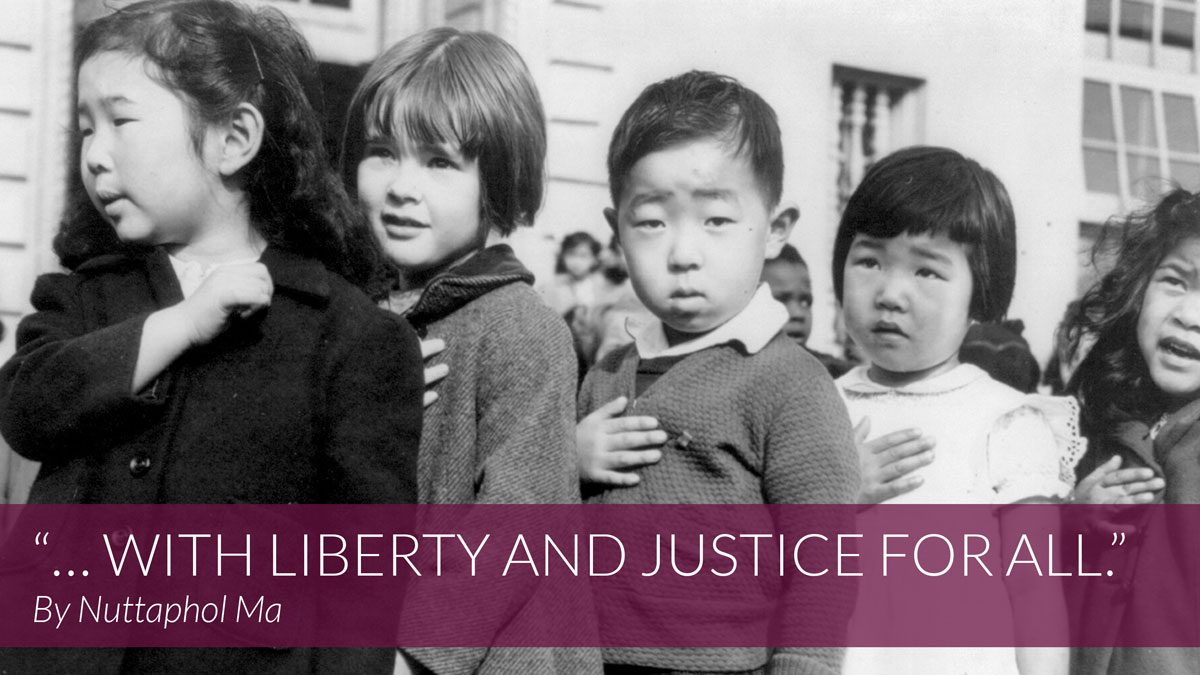 The two words, equal and justice, that form SFAI’s thematic residency are abstractions that are foreign to me. They float in the clouds. I see them but I can’t quite reach them. “They are floaties!” as my dear friend Jimena would call them. Where to start? How do I define?  How do I enter such conversations?

I turn inwards. I tap into my life experiences. What resulted is my earliest childhood memory of my first day of school in the United States. I was 7. I spoke no English. The 8am bell rang. Our teacher gestured the class to settle down. We all stood up. I looked around and observed. I saw my classmates’ eyes focused on a flag in front of the classroom. Their right hand touched their hearts. They began making sounds and murmurs; a song, a chant that I did not fully understand. A few months passed, and I recalled being able to recite a bit of the mumble jumble. It went something like this … “I pledge allegiance to the flag, ddryau blah au usunnahstei du aampuleblur wi sstayun ah goh blur egveh boh, …with liberty and justice for all.”

Equal justice and “… with liberty and justice for all…”. Can they really exist?  From that very first day of school to now, I’m still trying to wrap my head around this idea,  especially now when we are in the midst of a highly polarized socio-political tug-of-war. Who pays the price and at what cost? And, how do I begin to respond to the bombardment of stories where power is forced onto the disenfranchised?

I travel to a generation before me as I meditate on Dorothea Lange’s iconic image of first graders, some of Japanese ancestry, pledging allegiance to the flag at the dawn of a nationwide forced internment of a singled-out race. Have we not learned from our past? The skeptic in me may cloud my judgment. Helplessness works its way into my little inside voice, tells me “I do not know what to do.” I sigh, leading to multiple sighs – at times, leading to silent cries. Contradicting this overwhelming feeling, the warrior self in me speaks of hope and optimism. Instead of being consumed by the thought of “I do not know what to do,” I ask myself, “What can one do to break the silent norm?”

I turn to the unheroic actions of my artistic influencers, namely the poetic resistance of Rosa Parks’ sitting, the Tiananmen “Tank Man’s” unyielding stance and Gandhi’s monumental salt march. They all broke the silent norm. Their simple actions, simple marks become battle cries for resisting injustice. I aspire towards these gestures through my artistic practice.

So, what is it that I do? I am the soul of The China Outpost, my nomadic sweatshop of one. It operates within a migratory framework where I labor on transforming discarded plastic bags into threads — a material I’m amassing as one of the core building materials for the eventual reconstruction of my ancestral house. Deeply rooted in tackling contested sites, the outpost has occupied spaces such as Los Angeles’ Union Station, a site of the former Chinatown where community members were displaced during the 1930s to make way for the construction of the last major train terminus in the West. There, I performed simple gestures — cutting, looping, threading, spinning, coiling. Collectively, these movements disrupt the institutionalized representation of what a site should be, how one should act. In the end, I was able to engage with curious passersby in meaningful conversations about my actions and the spatial injustices that rest beneath the land.

As the SFAI Alumni Fellow, I take refuge within this nurturing environment. I engage in purposeful dialogues with other residents about equal justice. We wrestled with its meaning and what it represents for each of us. The space opens itself for us to be vulnerable, to share our feelings and emotions as we navigate into the murky waters of our current socio-political climate. We shed tears. We laugh to get through it all. In the kitchen, at our communal dining table, at our potluck meals, we come together.

My experience here is truly a gift of time. A time that has allowed me to further my research on taking The China Outpost on a transcontinental journey where I am exploring radical cartographic approaches in remapping “The Grand Army of the Republic Highway” with my body, actions and words. Intersecting towns become contested sites for the outpost’s spatial interventions that reimagine a migrant’s “Manifest Destiny.” This is how I break the silent norm. I continue to march on, one day at a time; I continue to share stories with others, one person at a time.

If I were to make a pledge of allegiance today, it would be something like this: “I pledge allegiance to our flag, one open nation, in compassionate unity, with liberty and justice for all.” I wonder, how will your pledge read in order to achieve a more equitable space?