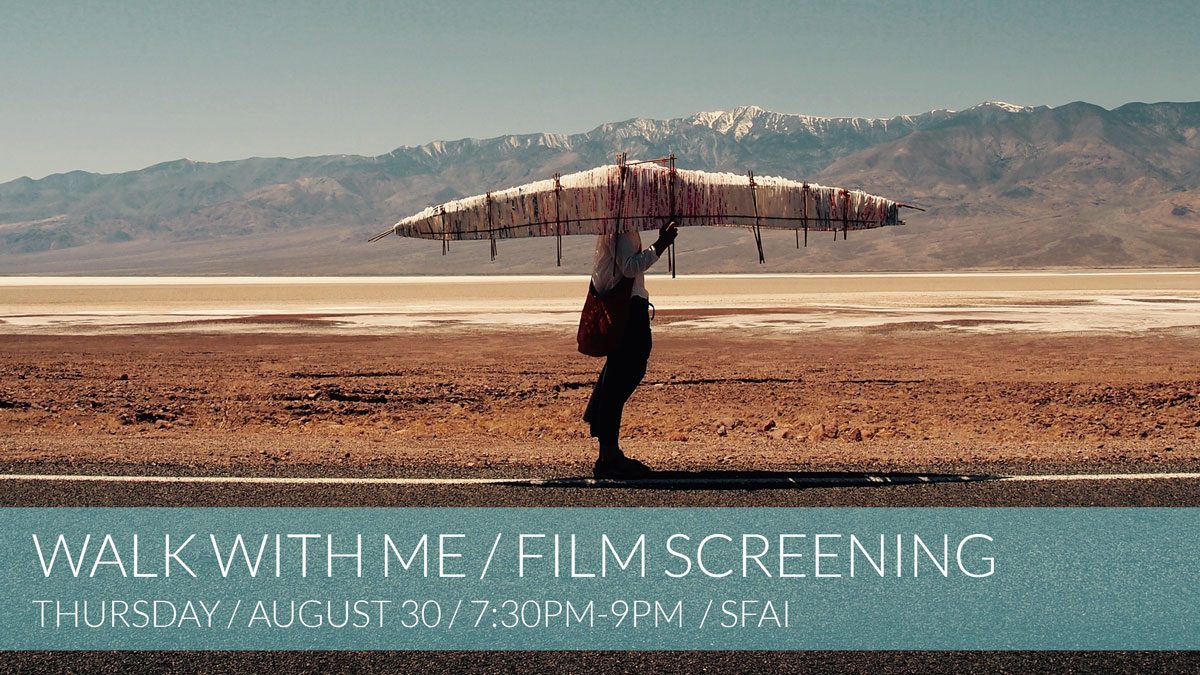 A series of films by Nuttaphol Ma will accompany his Walk with Me Exhibition.  Ma interweaves storytelling between each films to contextualize The China Outpost’s thematic exploration about invisible labor and her occupation of contested sites.

The films to be screened are the following:

Born by the River (28min) . 2013
From a chance finding of a B/W photo circa 1885 of an unknown Chinese laborer working in Death Valley, I took on his persona to march out of Badwater Basin.  The resulting essay film questions the interpretation of the structural remnants of Harmony Borax Works, the laborer’s employer, as to why the plaque of this national landmark honors the owner and not the workers.  This absurdist undertaking exemplifies what one can do to break the silent norm. The work begins my probe into the ideals of the American Dream by revealing the spatial injustice of such contested sites.

Shitpipe Explosion @ The China Outpost (28min) . 2012
The short film captures an event that took place at The China Outpost, a self-imposed sweatshop created by Nuttaphol Ma at the basement of a defunct art gallery in Chinatown Los Angeles from 01 Oct 2011 to 31 Dec 2012. As a result of sewage water from the gallery’s toilet directly above the sweatshop overflowing into the space, Ma was told that part of the sweatshop was to be jack-hammered on 10 Feb 2012. In preparation for the event, Ma cut the site in half, one side to continue to iron while the other side to stage the workers’ excavation and realignment of the shitpipes below. Readings from Maxine Hong Kingston, Andrew Lam, dialogues between the unknown workers, sounds from Donizetti’s Anna Bolena, the saw, the pounding align the seemingly disconnected points to create murmurs between the spectacle of the mundane and the absurdity of the everyday.

A Grain of Rice Under a Microscope (8min) . 2013
The film’s undertaking was inspired from an event that took place at my retail day job on a busy Autumn Sunday in 2010. One of my colleague approached me looking deeply distraught. She saw our managers watching our activities on the sales floor from the office’s computer monitor making a “play-by-play” commentary of us. This exchange left me numbed. I woke up the following day feeling like a grain of rice under a microscope.

In 2013, I set out to retrace my experience of that busy Autumn Sunday. Under my own terms, I performed the act of sitting and surveying in and around the premise of a fast food restaurant to mirror the 8 hour shift of the workers behind the counter. Two rolls of B/W super 8 film were deconstructed to shoot one frame for every four seconds in order to captured my 8 hour sitting where I recorded unfolding events and conversations that occurred between management, myself and two police officers.

The China Outpost > on the road @ Union Station (2min) . 2014
According to the statement of significance from National Register Nomination, “ Los Angeles Union Station, is a very handsome landmark that is a milestone in architectural history and the history of transportation in America.” What the statement of significance failed to acknowledge was the displacement of community members of what was the original Chinatown where the station is built upon. My site specific performance of re-situating and working within the mobile unit of The China Outpost at Union Station silently protested the spatial injustice that lies beneath the land. The durational performance of processing plastic bags into threads at this contested site invited curious passerby to meaningful conversation about my actions and the history of Union Station.

Whist there, Mike, a wanderer from St. Louis approached me. I asked him if he has family. His mother lives in Phoenix caring for his 84 year old grandmother. I asked him why not join them. He responded, “the house is too small.”

The China Outpost > on the road . New Mexico . 01May-27May2016 (15min) . 2016
Day in and day out, from 01May to 27May 2016, The China Outpost occupied parking lots of big box stores along Cerrillos Road – a major thoroughfare leading to Santa Fe that has eroded its intimacy to a web of megastores. The sociocultural interventions at these contested sites function as make-shift forums that invite curious passerby to open ended conversations about migration and the labor of adapting to a new home.

The month’s work is housed in an essay film that captured an unscripted journey culminating to a serendipitous conversation with the Governor of Abiquiu Pueblo named Ten Crows in which he posed an un-answerable question, that is … How do we free our oppressors?

Mr. Proud, Why do I Have to Memorize the Star Spangled Banner? (2min) . 2017
Invisible labor goes unseen, unheard and those who put in the labor repeat the task over and over again. It is an arduous conditioning of the mind to stomach the pace, the rhythm. It is heroic because collectively these unspoken tasks are the voiceless blood and tears of our socio-economic landscape. This site specific durational work transforms the gallery’s wall space into a form of a flag – a nameless, stateless flag that honors the heroic mundane with dimension repurposed from a typical drywall size flipped horizontally.

The video documents the labor of my wall markings that took place at Human Resources Gallery’s “off” hours at 8 hour shift intervals as part of my durational performance work. These hours replicated the graveyard shift suggesting not as an artist’s attempt to romanticize and patronize the idea of invisible labor but it was my honest truth. At the time of making this piece, I, too, juggled jobs between multiple teaching sites and my retail day job. The only available hours in the day to navigate around my situation was from 11pm to 7am.