SFAI PRESENTS THE WEATHER UNDERGROUND: A NIGHT OF RADICAL IMAGINATION 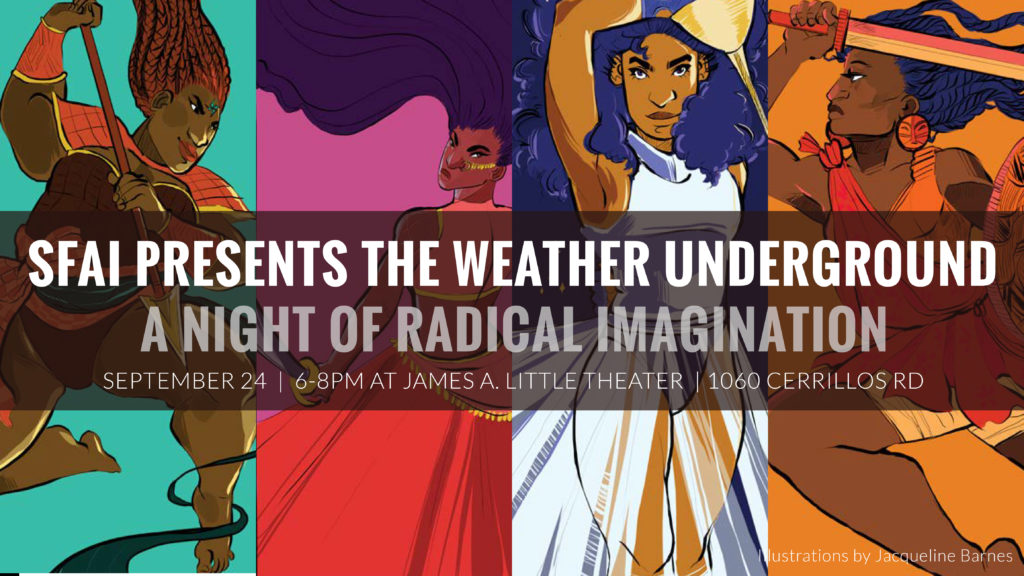 A Night of Radical Imagination: The Weather Underground’s Bernardine Dohrn and Bill Ayers in Conversation with SFAI’s Equal Justice Residents

Join SFAI for a night of Radical Imagination featuring two of “America’s Most Notorious Revolutionaries” (founding members of the Weather Underground), and contemporary artists actively working to create Equal Justice. Many of us are hungering for alternatives to our current politics and divisive rhetoric. We seek a society in which Black Lives Matter, our responsibility to the planet and Water Protectors is paramount, women and the LGBTQ community are safe, and immigrants and Dreamers are welcome.

As Bill Ayers writes, when the simple question “What if?” is taken up collectively, “it can be forged into a powerful tool with the potential to crack open the given world and provide previously unthinkable alternatives.” Radical imagination is a collaborative process. Through art, creativity, and radical activism, we can look beyond what isn’t working to re-imagine a more equitable world. 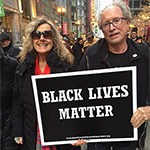 The Weather Underground, was a radical left-wing organization that grew out of Students for a Democratic Society, and the antiwar movement of the late 1960s. Also known as the Weathermen, their goal was to create a clandestine organization that would escalate actions against the US invasion and occupation of Vietnam, resist rising state repression, concretely support the Black Freedom Movement, and build a revolutionary movement capable one day of contesting for power. Their opposition to the American war in Vietnam—in which 6000 people a week were being slaughtered—led them to conduct a campaign of sabotage against military and government targets through the mid-1970s. The group is the subject of the 2002 Academy Award nominated documentary, “The Weather Underground,” and an earlier (1976) film, “Underground,” by the legendary documentary film-maker Emile de Antonio, Academy Award winning cinematographer Haskell Wexler, and Mary Lampson, filmed in undisclosed locations while members of the group were actively hunted by the FBI. Learn more about the Weather Underground Here. Learn more about the Weather Underground Here. 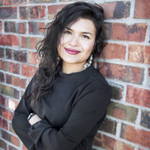 Originally from Truchas, New Mexico, Alicia Inez Guzmán currently lives and works in Santa Fe. Her writing focuses on indigenous and mestizo art practices and histories of land use in the Southwest. She is a 2017 recipient of an Andy Warhol Foundation Creative Capital Arts Writers Grant for her website Tierra Firme Projects. 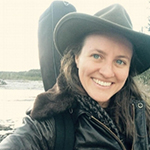 Eileen Shaughnessy is an educator, activist, and musician. Eileen teaches courses in environmental and social justice in the Sustainability Studies Program at the University of New Mexico. Her courses focus on racial justice, feminism, and nuclear issues. Eileen is also the front woman for the social justice indie folk band Eileen & the In-Betweens. Eileen’s songs and activism are rooted in queer anti-oppression work and the desire to mobilize art as a tool for social change. She has release two full-length albums of original music with the band (with a third coming spring 2017) and they have been invited to perform their uplifting social justice music across the U.S. and Canada. In the summer of 2016, for their Truth & Beauty Tour the band performed in 16 cities in collaboration with environmental and social justice groups, such as, Nuclear Information and Resource Service (NIRS), Diné No Nukes, and Nuclear Energy Information Service (NEIS) bridging the worlds of activism, art, and music. In the summer of 2017, they have ambitious plans to tour the west coast and across Canada, again experimenting with music as a powerful tool for social change. Eileen is also an experienced facilitator in the “Work that Reconnects,” which ties together spiritual resiliency, activism, and group work. In 2016, Eileen’s solo shows have included the New Mexico Song Swap at the Art of the Song Series (nationally syndicated on NPR), performances in Calgary and Montreal Canada, and weekly performances at Java Joe’s in Albuquerque. Eileen & the In-Betweens have performed for KUNM’s Ear to the Ground series, the Albuquerque Museum, an the Albuquerque Women’s March. 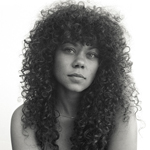 Eliza Myrie born in New York in 1981 and currently lives and works in Chicago, IL. Myrie was a fellow at the MacDowell Colony in 2016, Artist-In-Residence at The University of Chicago in 2012, and participant at The Skowhegan School in 2010. Myrie received her MFA from Northwestern University and her BA from Williams College. Myrie has taught at the School of the Art Institute of Chicago and Williams College and convenes The Black Artists Retreat. Exhibitions include Vox Populi, Philadelphia (2016); Shane Campbell, Chicago (2016); Roots and Culture, Chicago (2014); Museum of Contemporary Art Chicago, Chicago (2012); New Museum of Contemporary Art, New York (2011); Hyde Park Arts Center, Chicago (2010); Davidson Contemporary, New York (2010). Myrie experiments with multiple forms of popular media, focusing on class, ethnicity, politics, and race. She manipulates images through sculpture, printmaking, and drawing to create new narratives. 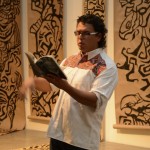 Israel Francisco Haros Lopez was born in East Los Angeles to immigrant parents of mexican descent. He brings his firsthand knowledge of the realities of migration, U.S. border policies, and life as a Mexican American to his work with families and youth as a mentor, educator, art instructor, ally, workshop facilitator and activist. Even with a 1.59 High school G.P.A., Israel managed to go back to the community college and raise his grades to get accepted into U.C. Berkeley and receive a degree in English Literature and Chicano Studies followed by an M.F.A in Creative Writing. At formal and informal visual art spaces, Israel creates and collaborates in many interdisciplinary ways including poetry, performance, music, visual art, and video making and curriculum creation. His work addresses a multitude of historical and spiritual layered realities of border politics, identity politics, and the re-interpretation of histories. 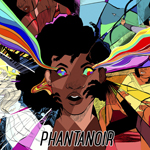 Jacqueline Barnes creates worlds that reflect our current society through a fantastical lens. She is a storyteller that engages with different forms of escapist media such as animations, speculative fiction, video games, and graphic novels. She also deals with creating different forms of representation within these mediums in terms of race, gender, and sexuality. Jacqueline’s work stems from a personal need to see herself and others represented positively in a fun and engaging way. Interdisciplinary at heart, she believes there is no one tried and true way to tell a story, and often employs different mediums in her work. Whether it be through word processing, panels and comics, or the in-betweens in an animation, Jacqueline finds the many facets of storytelling fun to explore. Currently, she is working on exploring the different facets of black fantasy and developed a new term: PhantaNoir, an exploration in black fantasy, in order to contextualize that work. 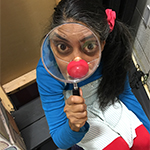 Originally from Chicago, Veena moved to Santa Fe in 2013 after twenty years of living in England. Primarily based in London during that time, she focused her work on embedding human rights principles into social policymaking. Since 2010, she has been working as a freelance writer, facilitator and mediator. Veena self-identifies as a Wake-Up Artist and Movement Maker, with a vocation to cultivate Beloved Community. In recent years, she has become particularly passionate about exploring the relationships between soul work, collaborative art-making and systems design/re-creation. This is the focus of her Equal Justice Residency and she has published articles about these relationships in OpenDemocracy. When Veena is not playing and experimenting in this arena, she can be found hiking, cooking family recipes, dancing, practicing the art of clowning and training to become a Feldenkrais Method teacher.