My history, like the land I grew up on, is tangled in the bends of dying rivers.

I’m from an area of north India known as the doab – literally, the land of two waters – sandwiched between the Ganga and Yamuna rivers, one of the most fertile patches of land in the world. My father was an engineer with the water works department and I grew up all over north India with his job transfers taking us from river to stream to rivulet, on top of the Himalayas one year to searing desert the next.

In the February of 2017, SFAI granted me a Water Rights themed residency to work on my collection of river essays, bestowing upon me that ever shifty entity that moves like water – time. In the rocky terrain of New Mexico I saw glimmers of my childhood homes. The fellow residents were friends and guides. Anna told me about the holy wells of Ireland, Franciszca read her water poetry, Courtney taught us how to make pots without flat bottoms that swung round and round.

In the local river legends, I heard the gurgling of the tributaries and distributaries that flow between the Ganga and Yamuna, and remembered. 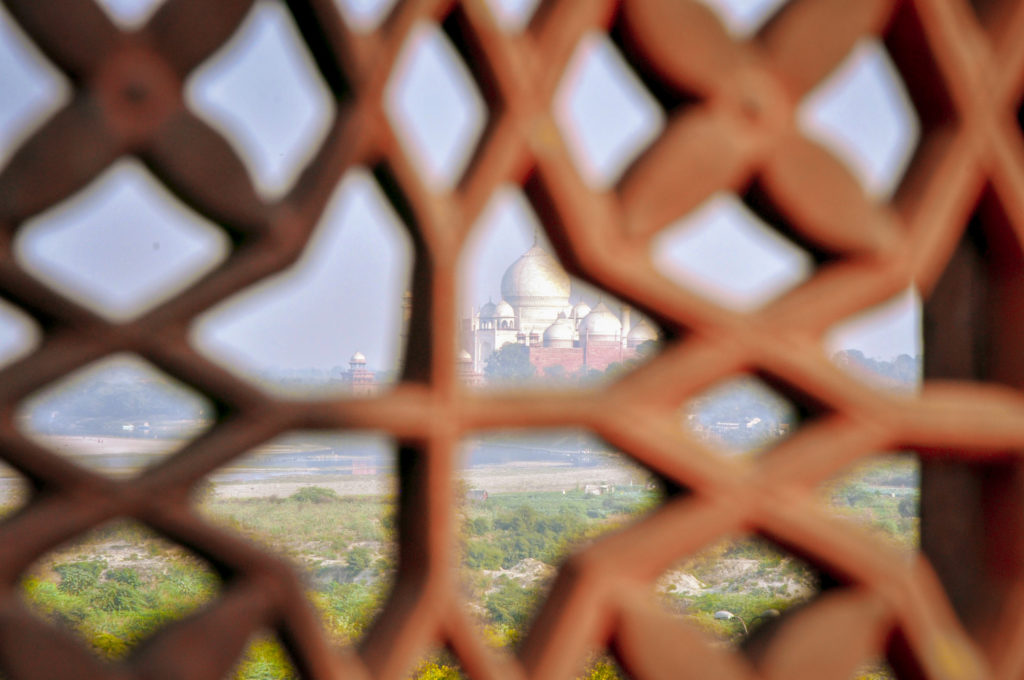 The Taj Mahal was built on the banks of the Yamuna, reflecting alabaster in the river on moonlit nights. The river hardly flows now and the riverbed is poisoned scrubland.

The Yamuna bursts forth as a geyser high on top of a Himalayan peak and descends down valleys and hills to reach Delhi. Onwards, it passes some of the holiest sites of Hinduism, pilgrimage spots that venerate the river more than the gods. Further down the course the city of Agra emerges, mushroomed around the Yamuna’s horseshoe bend, home to stunning ancient architecture, one of which is a world wonder – the Taj Mahal.

In India, the mythology of river goddesses is everywhere. The Yamuna River is a descendant of the sun god, the daughter of Himalaya, sister of the god of death. Ancient poets sang that Yamuna water was created from the sweat of Lord Krishna and his lovers when they made ecstatic love. Hinduism is a riverine culture, big on bathing in rivers. A dip in a holy river washes away all your sins. People bathe in rivers after marrying their children and cremating their parents.

Four thousand years ago the poet-seers of the Rig Ved chanted the origin story of Yamuna, also known as Yami, and her twin brother Yam, the god of death. Yami fell in love with her brother and wanted to consummate their relationship.

Desire for Yam has come upon me, she says, the desire to lie with him on the same bed. I whisper this again and again: mingle your body with mine.

In the Rig Ved, Yam rejects Yami’s advances. But in the Avestan version of the myth, Yam and Yamuna consummate their love and are the primeval parents of humankind. Human life is a helix of water and death.

This duality is not surprising when one considers a modern mythology, repeated in Indian newspapers again and again: The Yamuna is one of the most polluted rivers in the world. Over 3.5 billion litres of sewage passes through it every day. That’s a bottle of water for each person in China and India.

For fourteen million years the Yamuna has flowed, its chilly glacial waters unceasing, unbound. The Yamuna descends from the Himalayas to Delhi, on to Agra, and finally merges in the Ganga at Allahabad. One out of every twelve people in the world lives in the Yamuna’s basin, covering an area the size of Germany.

But with a lack of proper sanitation facilities, the Yamuna’s banks are also public lavatories. Over six hundred million people defecate in the open in India, usually close to sources of water, loading the banks with turds. The Yamuna’s fecal-coliform bacteria count – a measure of human waste – is a thousand times the World Health Organisation’s permissible limit.

Twenty percent of all communicable diseases in India are water-related. The poor don’t have access to safe drinking water or legal water connections. Due to compromised hygiene and sanitation habits, recontamination of filtered water is common. Over a hundred thousand people die each year from waterborne diseases.

In the sixty years since independence, various Indian governments have built eight dams over the Yamuna. This has severely intensified the paucity of water in the river. By the time the Yamuna reaches Delhi, she’s only ten percent of her original flow. She is sluggish and bloated with industrial effluents, toxic waste from paper and sugar mills, pesticides leeched from farmland, fecal matter.

India has so far spent eighty million dollars on unsuccessfully trying to clean the Yamuna but a minimum flow of freshwater is imperative in a river for it to cleanse itself. Because of the damming, seventy percent of the length of the Yamuna has no water during summer. In Delhi, the Yamuna flows only for the two months of the monsoon. The lethal number of bacteria in the river consume all the oxygen, and with the lack of a current, the river is asphyxiated, clinically dead.

At the northern edge of Delhi, this dead river is diverted again for the consumption of the capital city. Delhi ingests all the water and regurgitates it into multiple drains crisscrossing the city that join the Yamuna’s course.

So the river that leaves Delhi for Agra is not the Yamuna at all. She is the eructate of the second most populous city in the world. Delhi constitutes less than half a percent of the Yamuna’s basin area but excretes over five hundred million gallons of untreated sewage into the river each day.

At the upper reaches of Agra, the cadaverous river meets a smouldering cremation ground and the world’s most famous crypt – the Taj Mahal. 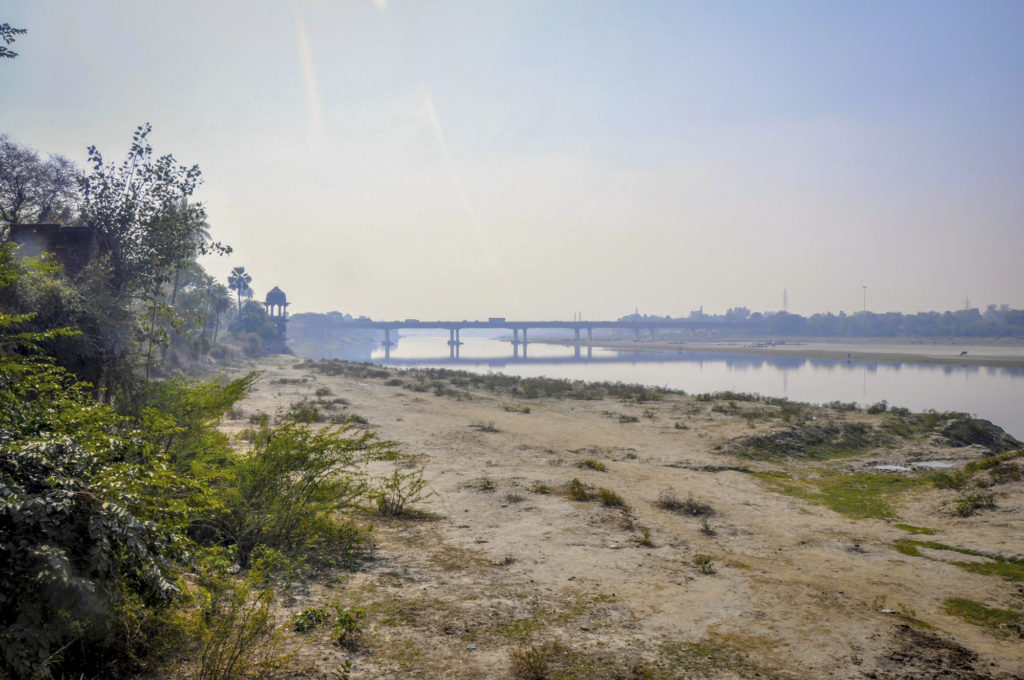 The world is changing at a dizzying pace and the ice caps are melting. The question is, on this drowning planet, what happens to the dispossessed who don’t have any privileges over this basic human right. The Ganga is a life-giving goddess that festers. The Yamuna is a helix of life and death. In a parched world, we write the rivers’ destinies – or do they write ours? 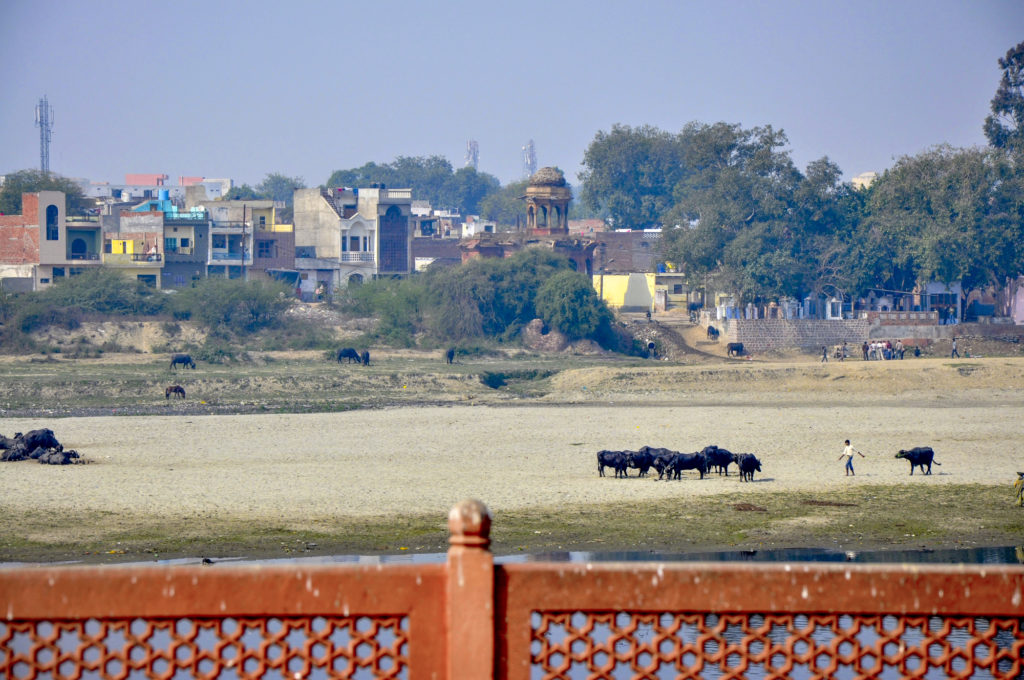 Cattle are a common sight on the Yamuna’s dried riverbed in Agra.