SFAI Blog: Creativity in a Time of Injustice 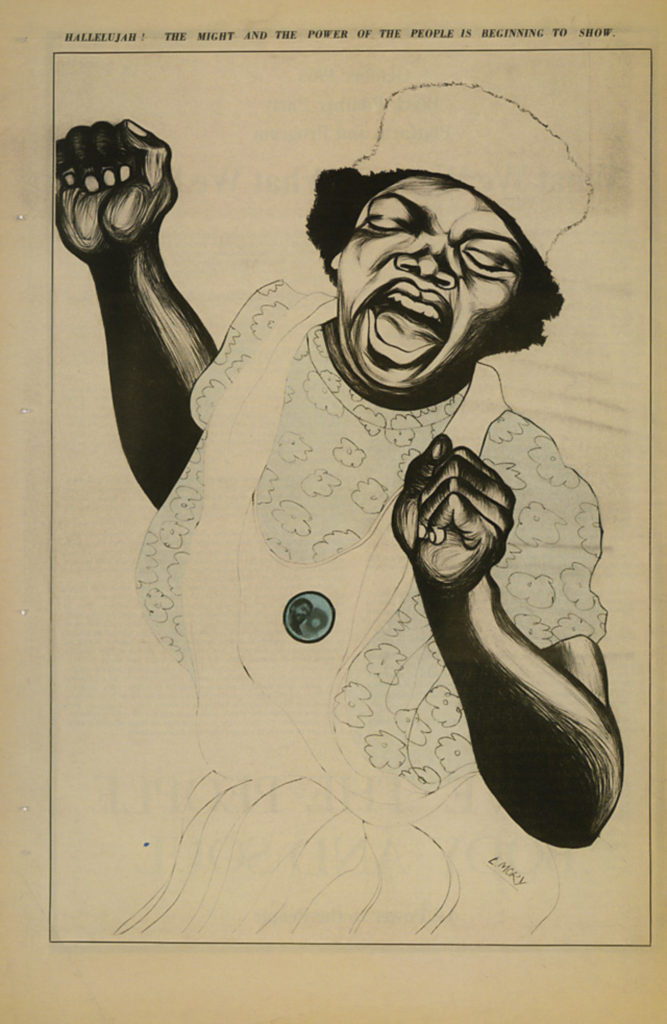 Take a moment to think back on a memorable progressive social movement in which you have participated. Think about the elements of the movement that stirred the most palpable sense of emotion in yourself and others – the parts of it that finally moved you to act. Short of actively building the movement yourself, there is something about a well-articulated political program and call to action that can become a part of one’s own personal imperative. What is that something?

There are likely many answers – shared experience, desire to contribute, or even sheer shock and dismay. I imagine, though, that the element of creativity plays a weighty role in galvanizing individuals and communities to seek transformative change. There are countless examples. Can you imagine the Black Panther Party for Self Defense without the now iconic artistic propaganda of Emory Douglas, or the migrant farm worker movement’s expertly crafted images calling for boycotts of oppressive U.S. corporations? And what about the powerful radicalism of the Zapatistas in Chiapas, Mexico, with images depicting every community member as an essential part of the struggle?

Authoritarian governments target artists and cultural institutions because creativity is a language that speaks directly to the human spirit. With just a few symbols, colors and words, an artist can shatter all of our preconceived notions – everything we thought we knew and believed. Employing the creative impulse in the work of greater good is a hallmark of human society, but so oftentimes our culture creates destruction instead of life – for instance, clear-cutting a forest instead of exploring intimate relationships with the web of life, or launching missiles to destroy a foreign enemy, instead of creating space and dialogue for diplomacy.

These factors are even more significant for those in our society bearing the brunt of the destructive impulse. In today’s military veteran communities, one of the most effective forms of post-service reintegration is art therapy. All around the world, veterans are using art, gardening, and creative writing to explore the edges of their skill sets, edges that may have been dulled from the suffocating restrictions of militarized environments. At the Veteran Farmers Project in Albuquerque, former combatants soften their hands to hold eggs instead of pistol grips, selling fresh organic produce to veterans at the Veterans Administration (VA) Hospital Grower’s Market. A retired Air Force veteran and Albuquerque resident told a local news station last year that working for the Veteran Farmer Project helped her reduce PTSD medications by more than half. As a member of Veterans For Peace, I have heard many similar stories and many of our chapters around the world include farming as an active and effective part of their programming.

New Mexico is of course one of the nation’s true cultural treasures, but did you know that our state is leading efforts to fund art therapy programs? The New Mexico Art Therapy Association, the affiliate chapter of the national professional organization, is holding the annual national conference this year in Albuquerque. With Americans For The Arts among their collaborative partners, they have helped expand veteran access to art therapy programs, of which veterans personally report outstanding results. Roy Meaders, Vietnam veteran, said, “It helped me to express my feelings through my art work and has given me confidence to pursue other activities, helping me to develop the skill needed to become an accomplished artist… [Art therapy] changed my life and the lives of my PTSD peers.” And the father of disabled veteran Eric Edmondson told The Washington Post that Eric “is no longer able to eat, walk or talk. But he can pick up a paint brush. When he does, his father sees in the former Army sergeant’s face glimmers of memory and healing as he seeks to paint his thoughts on blank paper. I can tell by his expression he’s enjoying it.” These are the results that lead the VA to provide over nine hundred art therapists at their medical centers across the nation.
Continuing to make great efforts into prioritizing access to the resources of creation and making is important in these times. After the recent news that the new federal spending bill includes a two million dollar increase for the NEA, a hopeful change from the threatened defunding just weeks ago, it may be easy to feel the landscape has shifted in our favor. Unfortunately, we cannot afford to rest easy, and that is not only because we have to defend these resources each year, but also because our resistance has to evolve as often as the opposition. This temporary victory is a result of the same process as many of our setbacks, and we cannot allow the forces of destruction to use our optimism against us. We have to recommit ourselves to community, culture and place, which is the formula for unleashing creative potential. When injustice threatens to take away our cultural histories, our community bonds, and desecrate our spaces, then we say “It Can Be Done” – we can preserve our future, and demonstrate to everyone that indeed the “might and power of the people is beginning to show.” Si se puede!